The Priory of England and the Islands

The Priory of England and the Islands is a part of the Order of St John, the international humanitarian charity. It is responsible for the delivery of the Order’s charitable mission in England and it oversees the semi-autonomous Commanderies in Northern Ireland, Jersey, Guernsey, and the Isle of Man.

The Priory’s main role is to support its well-known subsidiary – the charity St John Ambulance – in its first aid and caring work in the community.

The Order of St John today is an Order of Chivalry of the British Crown. Its care-giving mission is inspired by the medieval Knights Hospitaller, who established a hospital in Jerusalem in the 11th century to provide aid to sick pilgrims who had made the long journey to the Holy City.

Since that time the Order has developed and flourished and it is now a leading international humanitarian charity, recognised at the United Nations, with around 400,000 volunteers and staff in 40 countries. 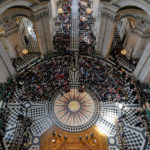 Each year The Order of St John commemorates the Feast of St John the Baptist with a Service of Commemoration and Re-dedication in St Paul’s Cathedral. This year, the St John Family are invited to a very different service when we can come together virtually to acknowledge our patron Saint.   If you wish to follow … END_OF_DOCUMENT_TOKEN_TO_BE_REPLACED 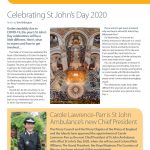 Priory News: Summer 2020 St John’s Day is, as ever, a highlight in the St John calendar and we take a look at the rather different celebrations that will be happening next week. Our Prior and Dean both share their thoughts at this focal point of the year. There have also been a number of … END_OF_DOCUMENT_TOKEN_TO_BE_REPLACED 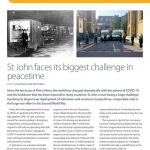 Priory News: Spring 2020 Since the last issue, life for St John has undergone an unprecedented transformation as we collectively face the challenges posed by the coronavirus. With teams now working from home and St John Ambulance fully focused on providing support in various ways to the NHS, the news reported in this issue will … END_OF_DOCUMENT_TOKEN_TO_BE_REPLACED