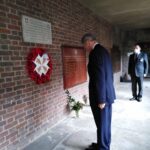 As the final act of this year’s Remembrance events, Michael Messinger, Chancellor of the Priory of England and the Islands, laid a wreath on behalf of all St John people in the Memorial Garden of the Priory Church in Clerkenwell.

With the ongoing effects of the COVID-19 pandemic, the events have been necessarily smaller in scale this year.

Last week, the Duchess of Cornwall opened the Field of Remembrance at Westminster Abbey where a St John ‘plot’ was planted in memory of all St John People who gave their lives in the cause of freedom. Our Prior, Lionel Jarvis, was also present in his capacity as President of the Royal British Legion Poppy Factory which oversees the Field of Remembrance.

On Saturday evening, volunteers Dr Sarah Davies and Zain Osmani represented St John at the pre-recorded Festival of Remembrance from the Royal Albert Hall. On Remembrance Sunday, Peter Hollely took part in the National Service of Remembrance at the Cenotaph alongside colleagues from the other civilian services.

“A hundred years ago, on 11 November 1920, the final version of the Cenotaph in Whitehall was unveiled by King George V and the Unknown Warrior was brought from a battlefield cemetery in Northern France and was honoured at the Cenotaph before burial at the west end of the Nave of Westminster Abbey. He was buried under French soil surmounted by black Belgian marble. A hundred holders of the Victoria Cross were present at his burial, as were a hundred mothers who had lost their husbands and sons in the conflict of the Great War.

“The Grave of the Unknown Warrior continues to be a powerful and vivid symbol. Early in my time as Dean of Westminster, we welcomed groups of soldiers at the Grave during their early training; they came to understand something of real importance in that encounter, setting their future commitment in a deeper context. And once or twice a year, Heads of State visiting The Queen would come to pay their respects at the Grave, laying a wreath and praying with me for world peace. This was a vital part of their State Visit. And the Field of Remembrance in St Margaret’s Churchyard to the north of the Abbey is another potent symbol of Remembrance, as thousands of crosses are marked, many of them named, in sections for the Royal Navy, Army and Royal Air Force, remembering not only the World Wars but the many other conflicts in which our compatriots have been engaged.”