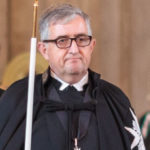 We are very pleased that the Director of Ceremonies, Andrew Latham has kindly agreed to an exclusive sixty second interview for Priory News.

There are too many to list, but in summary to have directed the Order’s ceremonial in the Priory, and to have lead such a dedicated and enthusiastic ceremonial team, has been one of the greatest honours of my life. The greatest highlight has definitely been the witnessing the Investiture of so many loyal and devoted servants of St John who have received recognition, sanctioned by HM The Queen, for their exceptional service to the Order and those we serve. I have seen first-hand that for some it is the pinnacle of their St John career and for many it is the highlight of their whole lives. It has been both humbling to hear of their stories and witness the recognition of all their devoted service. This is a memory that I will always retain; it has been a huge privilege.

Can you tell us of an amusing “behind the scene” story that has occurred but that the guests were completely unaware of?

I remember at one Chapter meeting, when one of the hand-held microphones appeared not to be working, a member of the Ceremonial Staff left Chapter Hall to see if a change of battery would resolve the issue. However, unbeknown to him the microphone sprang back into life so that the whole of Chapter heard him humming as he headed to change the battery stopping on route the lavatory immediately off Chapter Hall. Fortunately, another quick-witted member of the team, as ever, full of anticipation (the watchword for Ceremonial Staff ), followed him and managed to get the microphone turned off before any further embarrassment was caused!

What would you consider to be your greatest achievement?

Playing my part and contributing as a part of the team in enabling those who attend Investitures as postulants, or those attending our ceremonial events to be reinvigorated in the works, aims and purpose of the Order in England and striving to always achieve the highest level of ceremonial; hopefully without being stuffy!

Any sad or disappointing moments?

Finishing as Director of Ceremonies, after the completion of my second triennium, will be a sad moment as it has been a huge privilege and a great honour to serve; I have enjoyed every minute of it; well almost every minute! Every year, when we complete the Act of Remembrance at St Paul’s on St John’s Day, we remember and pray for those members of the Priory who have died in the previous year; we remember those one thousand and seventy seven members of St John Ambulance who paid the ultimate sacrifice in the First World War and we remember the deceased Bailiffs and Dames Grand Cross as we lay up their banners. This has always been a very sad and poignant moment for me and many. This has been especially true when those remembered and prayed for have been people I have known and greatly respected.

How have you been able to fit in the role of Director of Ceremonies with your day job?

I am Chief Executive of icelolly.com based in Leeds and we live in Sussex! So, I spend a lot of time on the train and have three or four evenings per week in my flat in Leeds. I have been able to spend time planning the ceremonial events from there and whilst travelling. I have taken annual leave to be able to be carry out my duties when they fall during the week. I am very fortunate, as I have a very supportive and wonderful wife who keeps the “wheels of life turning” to make sure that I could execute my role fully!

If you had a plaque on your desk that was your motto for life, what would it be?

There would be three:
Pro Fide – For the Faith – to remind me that everything we do flows from the practical implementation of our Christian faith.
Pro Utilitate Hominum – For the Service of Humanity- to remind me that all we do is about service above self. To paraphrase JF Kennedy –
“Ask not what St John can do for you but what you can do for St John”
Omnia Vinces Perseverando – This is my old school motto – ‘perseverance conquers all’ i.e never ever give up!

What three pieces of advice would you give your successor?

Hold fast to that which is good but continue, as I have, to gradually evolve the ceremonial within the established framework and remember that anticipation is key to success!

Once you have stepped down from the role you will have more free time on your hands… do you have any plans for what you might do with the time?

I have been an active member of St John Ambulance since I was 11, 43 years ago. I will continue to be an Emergency Transport Attendant and I am an active Community First Responder for the Ambulance Service. I hope to do more of this service as it is what I originally joined St John to do. Also I hope also to continue to serve the Order, the Eye Hospital and the Priory in some role going forward.

He served the Order and its people well.

If you could be granted three wishes for the Priory what would they be?

1. To restore the numbers and morale of volunteers in St John so that we can increase our charitable output.
2. See the restoration of the central role that St John played in the life of the nation.
3. That we always remember our overarching focus must remain faithful service through the Order’s mottos – Pro Fide and Pro Utilitate Hominum.

I wish the Prior, the Priory and Simon Pollock, my successor, every best wish for the future and success in all its endeavours.•