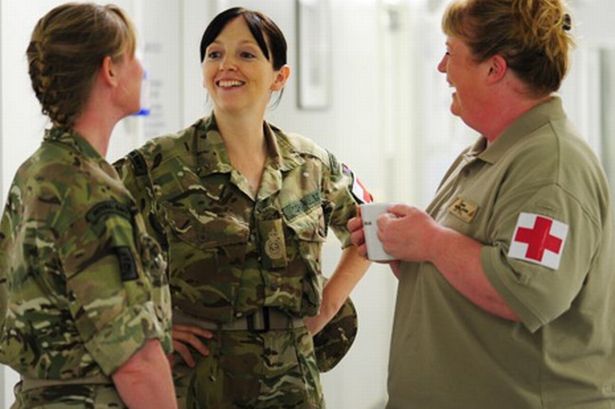 The St John and Red Cross Defence Medical Welfare Service (DMWS) is a registered charity that works for the Ministry of Defence, for the NHS, and with other charitable partners to provide practical and emotional support to the Armed Forces Community when they are in hospital, in rehabilitation or in recovery centres.  Its staff are currently located across the UK, Germany and Cyprus.

DMWS’s rich history can be traced back to the First World War, when the Order of St John and the British Red Cross were tasked to provide personnel to assist the medical officers in military hospitals worldwide, including on deployment in field units. The staff provided were called Welfare Officers.

In 1944 the two organisations were once again tasked to provide welfare support in Service Hospitals and medical facilities all over the world. They later became known as the Service Hospital Welfare Department (SHWD) and adapted their role to complement and underpin the clinical work of their medical colleagues. Wherever the Military were, so welfare officers would be found, working within both established and field medical units.

From the roots of its parent charities, the Defence Medical Welfare Service emerged as a separate organization in 2001.  It is consistently, the first welfare agency that the Armed Forces Community will see, after they have been admitted to hospital.

DMWS Welfare Officers support patients from all three services, wherever they serve, including working within Field Hospitals during times of conflict.

Its dedicated Welfare Officers are self-assured and confident, with excellent communications skills, who are able to use their initiative and display good judgement in solving problems as they arise.  Staff are ‘uniform attached’ – working, living and deploying wherever the Armed Forces are based alongside their military colleagues. Each officer has a deep-rooted understanding of the military culture and the unique nature of life in the Forces – over 60% of staff are either Reservists, Veterans, spouses or partners of serving military personnel.

Most importantly, Welfare Officers provide total holistic care, giving practical and emotional support when it is most needed by service personnel or their families. They are drawn from a wide variety of backgrounds including health professionals, dependants and former military personnel with welfare experience. Every one of them is trained in Mental Health First Aid and holds a Level 3 Diploma in Welfare Studies.