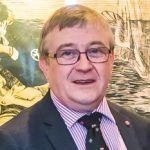 The Priory of England and the Islands of the Order of St John has selected Paul Herbage MBE CStJ for the role of Priory Hospitaller. He succeeds Surgeon Captain James Walsh KStJ RD* RNR in this role, which is a volunteer position with an initial term of three years.

The Priory Hospitaller, who is a Priory Principal Officer and an ex-officio member of the Priory Chapter, is the principal liaison point between the Priory and the St John Eye Hospital Group (SJEHG) in Jerusalem and with its Head Office in London. In his role, Paul will be tasked with promoting the profile and visibility in England and the Islands of the SJEHG’s vital humanitarian work, organising fundraising and working with the County Priory Groups in England to promote local support of SJEHG.

Paul is a lifelong St John volunteer who joined as a St John Junior in East London in September 1961. As a Cadet, his first duty was on a first aid post in Whitehall for Sir Winston Churchill’s State Funeral in January 1965.

After university, Paul spent almost 30 years in NHS administration and management ending up as a Director in a large West London NHS Trust. A second career saw him as Clerk (CEO) to one of the newer City of London Livery companies before final retirement in 2017.

Within St John, Paul has held a number of Divisional, Area and District roles in Hertfordshire and London, culminating as Deputy Commissioner until December 2012. During that final year he acted on the St John Gold rota throughout the Olympics and Paralympics and was Gold Commander for the Thames Diamond Jubilee River Pageant. Paul was honoured to be appointed an MBE for his services to St John in 2013. Since 2013 he has been an Area President and a member of the Greater London County Priory Group, being appointed its Chair in 2016.

Married to Rosemary, also a lifelong St John volunteer, and currently Youth Lead for London West District, his other interests include the City of London where he has been actively involved for over 30 years, travel, food and wine, and his grandchildren.

Commenting upon his new role, Paul said: “It is a challenging time to take on the role of promoting the work of the St Jerusalem Eye Hospital Group which was founded in 1882 as the second of the two Foundations of the Order of St John. Just as the Priory and St John Ambulance face huge financial pressures in the post-COVID world, the Eye Hospital has had to cope with the impact on its ability to deliver essential eye care to a highly disadvantaged population in the West Bank and, like all charities, a funding shortfall. I shall really look forward, when international circumstances permit, to being able to see again first-hand the important work of the Hospital and its clinics. I’m sure that much will have changed since my last visit in 1980 as part of a St John Ambulance Year of Nursing project.”