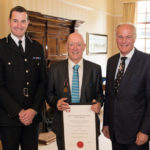 On Wednesday 14 June, Mr Bernard Kenny was presented with the Life Saving medal of the Order of St John in Gold for his actions in June last year when he intervened in the attack on the late Batley and Spen MP Jo Cox. Mr Kenny was himself injured in the incident as he tried to protect Ms Cox.

The Life Saving Medal was presented to Mr Kenny at West Yorkshire Police HQ in Wakefield by Surgeon Rear Admiral Lionel Jarvis, CBE, Prior of the Priory of England and the Islands of the Order of St John.

The medal was instituted in 1874 to enable the Order to honour those who saved, or attempted to save, the life of another and who placed themselves at imminent personal risk in doing so. So conspicuous was Mr Kenny’s bravery in the incident that he was awarded the medal in Gold, which is a very rare occurrence.

Speaking of the presentation, the Prior said: ‘The gold Life Saving Medal is awarded infrequently and exceptionally; in this case to an exceptional man, and an inspiration. I feel deeply honoured to have presented this medal to Mr Kenny for his brave action one year ago, in which he selflessly endangered his own life in attempting to save the life of another.’

Mr Kenny was also awarded the George Medal for his actions in the 2017 Queen’s Birthday Honours List.