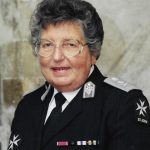 The Priory of England and the Islands sends its heartfelt congratulations to Baroness Audrey Emerton, who has become the first recipient of a special Lifetime Achievement Award from the Royal College of Nursing. This is a very well deserved award for the Baroness.

Baroness Emerton is a Dame Grand Cross of the Order of St John and a member of Chapter. She was the first Chief Commander and Chancellor in the Priory on its foundation in 1999 and has given 74 years of volunteering service to St John.

You can read about the Baroness’s award here.