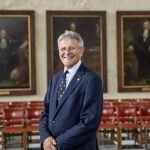 Due to the size and constitutional structure of London, the Lord-Lieutenant selects one of his DLs to represent him in each of the 32 London Boroughs. It is a great tribute both to our Chancellor and to his role in the Order of St John based in Clerkenwell in the Borough of Islington, that the Lord- Lieutenant, Sir Kenneth Olisa OBE CStJ, has selected Mr Mick Messinger LVO KStJ QPM DL to succeed Dr Charles Goodson-Wickes DL as the Representative Deputy Lieutenant for Islington on 7 November. I congratulate him on that honour and we look forward to that further strengthening of the relationship between the Order and the Lieutenancy.